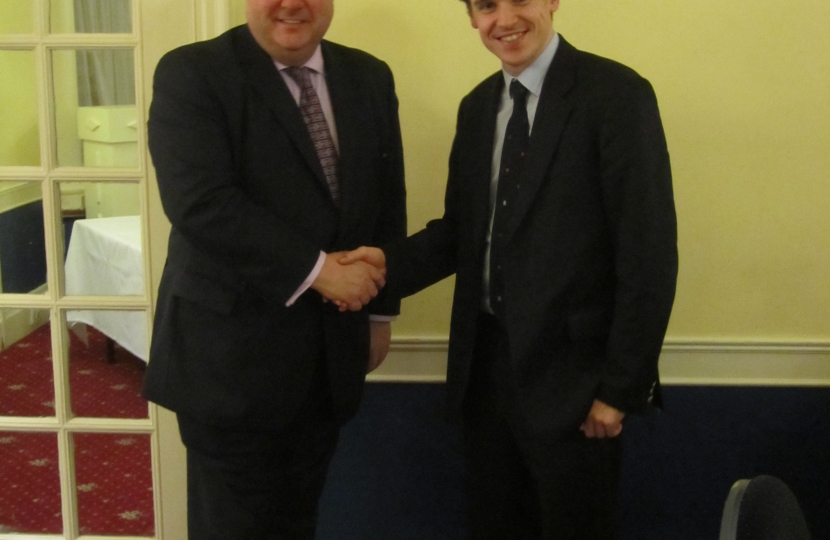 A full house of 100 people welcomed North West Cambridgeshire MP Shailesh Vara to the Broadway Hotel in Letchworth Garden City on Friday night.  Shailesh, who is Under Secretary of State at the Justice Department, had kindly stepped in at very short notice to replace Northern Ireland Secretary Theresa Villiers who had been due to attend, but had gone to Stormont on urgent Government Business.

Shailesh Vara talked about the hard decisions the Government had made to try and get the economy back on track, after many years of  Labour mismanagement. He also urged people to support the Conservatives in the European Parliament elections in May. He outlined how UKIP were a protest party who would only ensure even more isolation and less cooperation from European countries, with whom we did a lot of business.

Councillor Tom Hunt then spoke. Tom is a Conservative candidate for the European elections in May. He is the youngest candidate in the country, being just 24 years old and was elected three years ago as a councillor in Ely.

Questions from the audience varied from the NHS to Northern Ireland.

Finally our own Oliver Heald MP proposed the vote of thanks. He reiterated what Shailesh had said earlier. That the Conservatives are putting the country right, and whilst there was still a long way to go, employment figures, inflation and business confidence showed that things were working.

A good night was had by all!