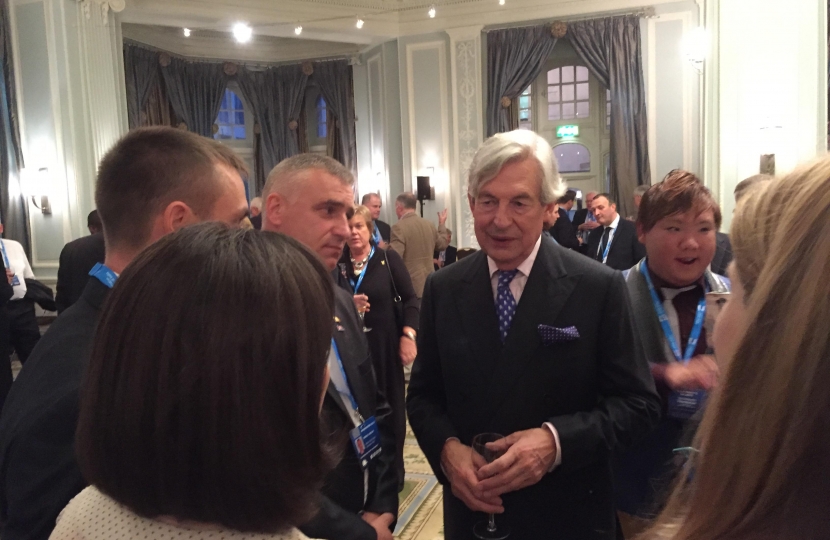 As a veteran of Conservative Conferences, this was one of the most encouraging I have been to since the 1980s.

Despite a terrific victory in the Election in May, it was not triumphalist. Of course the result was applauded, but it was much more a conference about business and the future.

What was very clear was how we are trying to fill the gap representing working people and people in poverty, vacated by the current Labour Party. Their warring factions, living in the past, and living in a Marxist dreamland, have forgotten what is their real duty. To represent ordinary people and help improve their lives.

From Theresa May and her powerful, hard hitting speech on Immigration to Boris Johnson, who in addition to his usual sense of humour, set out a positive case to continue his good work in London by voting for Zac Goldsmith.

The Prime Minister was outstanding. His speech full of ideas and policies to help working people succeed in this Country. His threats to potential terrorists that the UK will not stand idly by and allow them to attack either this Country or their own people. He fully deserved his long ovation.

Three final things struck me. In what was the largest number of people at Conference for many, many years, there were considerable numbers of young people and women. Great news for the Party. A number of outstanding speeches were made by new MPs, in particular new young women MPs. A great sign for the future.

So what about the protestors. Never have you seen such hatred and abuse as we all took when entering the conference centre. It reminds me of the days when Mrs Thatcher was PM and how we got threatened by the hard left. They were a combination of anarchists, socialist workers, communists and Trade Unionists, all empowered by the election of Jeremy Corbyn. Though the more they are shown on TV the more ordinary people will see what the hard left stands for.

There are plenty of videos and speeches on the Conservative Party website. Please do go and have a look.

The picture shows one of our hardworking local MEPs leading a discussion on the EU in Manchester.