Andrew Huggins is a 36-year-old father of three and local Councillor of East Herts Council. Having started his career in the British Army, he is now an ex-forces veteran of two operational tours serving within the Royal Artillery. Andrew is currently employed as a commercial airline pilot with the rank of Captain and with the additional responsibility for the training of new pilots. Outside of work, he has served as; a school governor at a successful first school; Vice-Chairman of a local branch of the Royal British Legion and as a Town & Parish Councillor. In his spare time, he is currently reading Politics, Philosophy and Economics with the Open University. He also enjoys playing golf and is an avid Rugby fan. Andrew is passionate about family values and the desire to serve his community. Andrew has previously served three years as Honourary Treasurer for this Association and was elected to Deputy Chair Political at the 2021 AGM. There are several key challenges ahead, and Andrew is excited to get started. 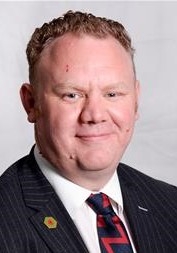